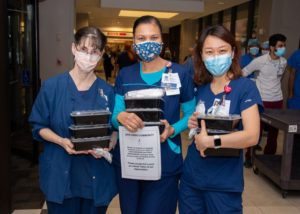 Hindus from across North Texas have provided more than 20,000 meals to local frontline workers and first responders.

That includes 12,000 meals to healthcare workers at Parkland Memorial Hospital, UT Southwestern Medical Center and several hospitals in the Baylor, Presbyterian and Methodist systems, according to Amy Elliston Rainwater, an outpatient therapy educator with the Parkland Health & Hospital System.

An additional, 8,000 meals were provided to first responders in Allen, Dallas, Frisco, Garland, Plano and Richardson, and workers at the North Texas Food Bank have received more than 900 meals.

The meals were provided by Hindu-American-owned businesses such as Genghis Grill, Little Caesars and Subway, according to a news release.

“The Dallas-Fort Worth Hindu community appreciates the health care workers, first responders, local communities and others who are on the front lines working to contain this pandemic,” Ashok Mago, who led the efforts in North Texas, said in a written statement. “As proud members of the Hindu community, we remain committed to the health, safety and well-being of the community and will support those who need it the most during these unprecedented times.”

Organizers of the effort said they will continue the program for as long as it is needed.

A number of doctors have individually contributed to the cause, as has The Texas Indo Physician Society. Other support has come from the Global Hindu Heritage Foundation, DFW Hindu Temple, Chinmaya Mission and Hanuman Temple.

“As a community, we wanted to make sure no one who is working to keep us safe was left out of our efforts,” organizer Neel Gonuguntla said in a written statement.

LIST: These companies are giving discounts to frontline workers of the coronavirus pandemic